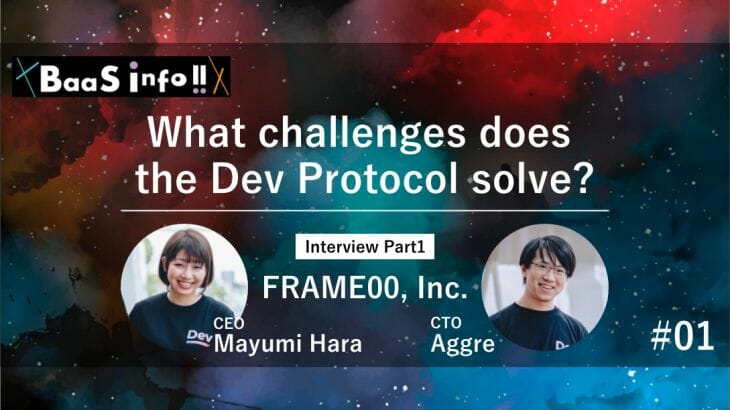 A special interview to spotlight people who play an active part vigorously in the blockchain world. Guests for this time are Mayumi Hara (CEO) and aggre (CTO) from FRAME00, Inc.

The interview is divided into two parts, and this time, we’ll focus on “Dev Protocol”, which is a growing protocol involving numerous users from overseas.

【Profile】
CEO: Mayumi Hara
Mayumi Hara is a serial entrepreneur that has been building brands since 2011 in various industries. She spent 2014 studying the value creation gaps for Japanese artisans working on and preserving Japanese temples. In 2015, after studying the creator industry and building relationships, she incorporated Frame00. Frame00 is developing Dev Protocol which uses blockchain to address the incentive models for supporting open assets, especially OSS.

— Thank you for coming to our interview today! First, please introduce us the service of FRAME00 and briefly tell us challenges that you want to solve.

For example, when it comes to Open Source Software (OSS), everyone understands its technological value, but its economic value is disregarded. That’s why we created a protocol that allows creators, producing value, to receive sustainable funding to monetize their projects.

A big difference from traditional donation model is incentives for supporters

Mayumi: One of Dev Protocol’s advantages is the implementation of staking. A creators’ community can now support creators by staking the DEV token. With Dev Protocol both creators and supporters receive staking rewards based on the protocol’s yield.

Who are creators?
In Dev Protocol, creators are those who create open assets, which are free to consume, like OSS and Youtube. These creators can authenticate and tokenize their work to produce “creator tokens”.  Holders of the creator token receive creator rewards from their community’s staking. Creator tokens use the ERC20 standard which gives creators flexibility in sharing the token with team members.

What is staking?
Staking is an action in which people deposit their token into the smart contract to support a creator. Minted DEV allocated proportionally, to the creator and supported, based on the amount of tokens deposited and staking reward. The staking reward calculates the total DEV staked and creator assets’ onboarded. When more DEV tokens are staked the reward lowers, but increases when more creators join the platform. Users can start staking for your favorite creators on our official dapp, Stakes.social!

What is the DEV Token?
Dev Protocol’s native ERC-20 token is DEV. Users can stake DEV for creators’ assets. New DEV is minted based on the staking reward for creators and supporters. Creators can then exchange DEV for ETH, and other tokens, at exchanges such as Uniswap. DEV provides financial incentives for supporters who also receive minted DEV. This creates a new solution besides donating for open assets which puts the DEV token at the center.

Aggre: Because OSS is basically free and open, you don’t have to pay to use it, and won’t be asked to pay. That’s why we have no other options besides donations to support OSS developers.

However, as a sresult of donations, OSS sustainability is regarded as highly dubious. Donations are based on altruistic actions, so basically, donations didn’t seem to be an ideal model for creators to keep their work.

—I could see the system where supporters have incentives by the introduction of staking. Can you tell us more about challenges on donation?

Aggre: According to statistics, 83% of OSS projects are suspended or stagnate within a year. In the case of OSS,  developers can’t fully commit to the development unless they can collect sufficient donations. Only the few funded developers can continue to maintain OSS.

Unfortunately, most projects don’t have this luck. Therefore, developers have to squeeze their OSS contributions in their free time. Because of this we have a strong urge to reshape the donation industry. Currently, there are platforms for OSS donations, but financing tends to concentrate in a few popular projects.

Mayumi: People working on OSS projects need to engage in PR and marketing in addition to their regular work, which is the development of OSS, in order to get donation continually. These tasks are not essential to the developer, but they are burdensome.

Aggre: In many cases, donation is transient, so developers make an effort by doing extra work except developing. It is a heavy burden for developers who busily work for development in their free time. Many of them also have regular job at the company they work. Even if they could collect donation once, they have to keep it, and that usually makes it difficult for them to continue development.

Why did the number of oversea users increase in Dev Protocol?

— I heard that the number of oversea users increased in June 2020. What was the trigger for it?

Mayumi: We developed service called “Stakes.social” and its pre-release for developers was held in June 2020. One of the private investors came across it and joined our community on Discord.

We communicated in English long before June. You can find a lot of English content related to Dev Protocol on Medium. Our very first investor became familiar with Dev Protocol after reading them.

In the end, many users support our funding model, vision, and admire the commitment level of our development team. That’s why people pass on our information by word of mouth, saying, “Dev Protocol has a great future prospect” or “Fantastic team work”.

— As a result of your continuous and complaisant communication, Dev Protocol got attention from overseas’ investors and spread.

Mayumi: We didn’t use any special techniques, but spent much time on building credibility. We’ve paid much attention on making reliable content and products.

How did they attract OSS developers to Dev Protocol?

— OSS developers joining Dev Protocol are not always familiar with blockchain or cryptocurrency. How did you get their attention?

Mayumi: In the MVP phase (Minimum Viable Product), we explained the system of Dev Protocol very precisely to OSS developers who are not familiar with blockchain. Sometimes we had 1 on 1 meetings to explain the project to them.

We’re glad to see the current situation where people in the community spontaneously share knowledge for newcomers.

— I can see that Dev Protocol has a culture of sharing knowledge, utilizing supports of the community. I heard that the total download of OSS, which was developed by developers joining Dev protocol, exceeded 8 billion. What was the factor for such a huge number?

Aggre: Areas, which we have worked on since the time of MVP, were Open Source JavaScript developers. We limited OSS participation to nom (node package manager) for a while.

We directly contacted developers who create a highly popular library in npm, and communicated with them 1 on 1. Only one of them joined our community. His onboarding became the trigger which led to many other developers joining Dev Protocol.

Today, the total downloads of OSS using Dev Protocol increased, although there is imbalance in each project.  We’re pleased that people join Dev Protocol no matter how big or small the projects are.

— Could you tell us the reason why you could invite developers of popular libraries?

Aggre: We saw OSS developers facing challenges on financial matter. All OSS developers want to focus on their projects, but don’t have enough resources to continue. Each of them felt the same challenge which was a lack of donations. We thought all of them were looking for the solution to solve this.

Mayumi: We felt strongly rooted stereotypes on cryptocurrency. Some said it’s suspicious and riddled with fraud. Since some OSS developers are not used to cryptocurrency we had to explain it to them carefully and in detail.

One of the npm developers whom we got in touch with said, “I can join, but I can’t recommend it (Dev Protocol) to other developers”. Until recently, he finally changed his mind and started actively recommending it to his friends which he supports by staking DEV.

— That sounds fantastic! By the way, I think Dev Token utilizes Ethereum. What do you think of the choice of platforms? If you have any plan to change it, please let us know.

Aggre:  In the near future we’re not thinking of choosing any other network except Ethereum. Ethereum has the largest user base, and we put emphasis on decentralization. While we consider gas costs, we believe Ethereum is the correct choice in the foreseeable future.

In the long run, we may shift to another network, but there aren’t any attractive alternatives so far. In the future we may have to explore our options considering the growth of the network.

— I see. Thank you. What do you think of the problem-solving projects for interoperability such as Polkadot and Cosmos?

We’re interested in interoperability as well, because relying on one native chain could be dangerous. If it falls into a decline, the whole deflates.

For our project, which is a protocol layer, we care about the number of users and users’ demographics.

— It seems you use Ethereum from the viewpoint of user demographic and decentralization. I have a question on decentralization. Could you tell me the reason why you adopt the governance of “Quadratic Voting” in Dev Protocol?

Aggre: In Dev Protocol, users can suggest features and change some of the protocol’s variables. Users can vote on the features they think would benefit the protocol. Dev Protocol uses Quadratic voting for governance decisions which is a voting model where voters rank their preferences by allocating votes. We encourage users to rank their preferences by allocating votes which should benefit the collective.

For instance, in the situation where one person has only one vote, the second best option for most people cannot be chosen. This is because everyone can vote only once for what they think is the best. However, if No. 1 and 2 are narrowly ranked, No. 2 might be the best choice for the community as a whole as most people think it’s also a great option.
We adopted Quadratic voting because it allows our community to find the best option, and fits Dev Protocol’s culture.

— I see. Did you have any case example that you referred to in order to adopt Quadratic Voting?

Aggre: Nothing special, but I read Toyotaka Sakai’s book, “Tasuketsu wo Utagau (English: Doubtful majority vote)”, which was very informative.

— What made Frame00 join Microsoft for Startups?

Aggre: When I attended a study workshop, I met Kazumi Hirose (Deploy Prince) from Microsoft. After the workshop, I talked to him about Dev Protocol, and he became interested in it. That was the start of our relationship. After that, we discussed how Frame00 could get support from Microsoft. He suggested to me that our company participate in Microsoft for Startups, and we decided to.

Startups like us got much support and we’re grateful to be a part of it. We can reduce our infrastructure costs thanks to free Azure credits. We also received valuable feedback on our business. Microsoft is also working on blockchain’s social implementation which is valuable since we can share ideas and receive feedback from a major enterprise.

Interview with Mayumi and Aggre from Frame00 continues to Part 2.

Next, we’ll talk about the factors that make people difficult to monetize and the establishment of Frame00.